Bursitis is common in athletes. It is the inflammation of a bag of liquid that acts as a cushion in some joints. It is often found in the shoulder or tight. It tends to respond to different treatments, which often do not resolve the underlying cause.

What is Shoulder Bursitis?

A thorough examination by a doctor of Chiropractic looking for the origin and true cause of the problem, will allow us to find, for example, a dysfunction in joint mechanics that causes compression or rubbing of the bursa that inflames and swells. The causes for this dysfunction changes from patient to patient so a treatment of the true cause will ensure a positive response from the body in the healing process of the shoulder joint. This inflammation causes severe pain in the shoulder joint. Let’s get to know this disorder better and see how we can get rid of it. 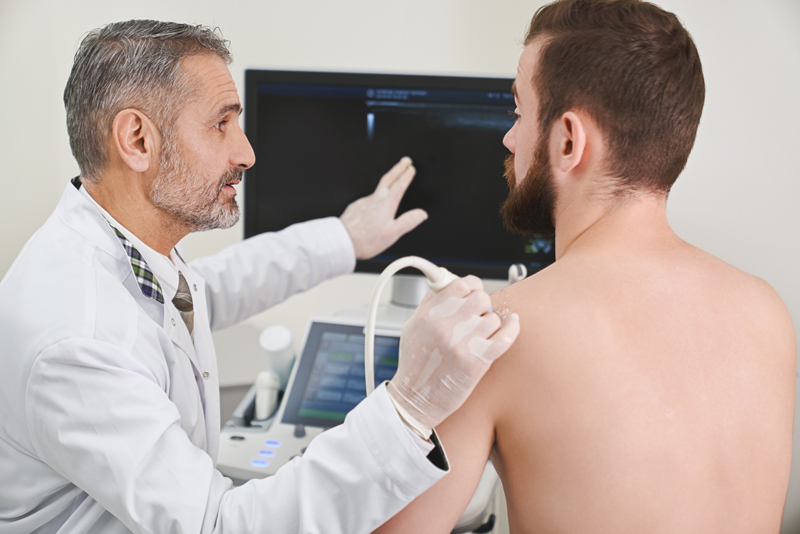 Don’t label your shoulder pain bursitis too fast, especially if your condition doesn’t improve after a couple of days off. There are many conditions for which shoulder pain is a symptom, but pain and swelling should not be ignored. Consult a physician or a doctor of chiropractic, a specialist in this domain, if your shoulder pain makes your daily activities or sleep difficult.

Chiropractors help those with bursitis problems, either directly, by reducing pain, or indirectly, correcting the origin of the problem: misalignment at the spinal level, imbalance, dorsal subluxations or of the scapular waist, affecting the correct function of the shoulder. Or, postural support that could have facilitated or caused the injury. So that, the chiropractic treatment completely cares for and relieves the symptoms, which helps the patient to regain quality of life in the short, medium and long run, removing pain and stiffness and restoring the correct joint range of motion.

The mission of the doctor of chiropractic is to verify the good alignment of the cervical and thoracic spine and that its physiological curvature is within normality. He will also verify the absence of a possible cervical, dorsal or shoulder subluxation. By restoring the vertebrae or shoulder joint to their natural position, interferences that create inflammation and pain are eliminated. What’s more, the nervous system recovers its optimal performance. Consequently, pains and disorders disappear and general and joint health and well-being is restored.

Unlike traditional medicine, chiropractic does not only treat a symptom, such as pain for example. On the contrary, it locates and treats the origin and the cause of the problem in a natural way, without resorting to medications and their side effects, nor surgery, thus releasing nervous interference.

In the first 10 to 15 minutes after your visit it is contraindicated to sit down.

During this period of time it is necessary to walk to mobilize the joints that we just release and walking also facilitate better joint lubrication and nutrition of the intervertebral discs.

IN THE NEXT 24 HOURS

During the next 24 hours following the first sessions avoid any excessive effort.

Otherwise, the effectiveness of the adjustment received will decrease.

Before and after every visit, avoid all kinds of tension.

Both physical and mental. The more relaxed you are the more benefit you will get from your treatment.

The set appointments must be respected.

They have been established to obtain the best results.

The sensations that each person may experience after an adjustment may vary without affecting the result and benefit of the treatment in the medium and long term.

After an adjustment, you may experience a feeling of relaxation, having a lot of energy, general well-being, disappearance or relief of symptoms, soreness or pain.

You may sometimes even experience discomfort since the body has to adapt to the new posture and position.