By whiplash we refer to the traumatic result of the head when, for example, in a car crash, the body is thrown violently forward.

consequently, the head is pushes abruptly back, and, later, during the deceleration phase, forward.

Injuries resulting from this particular type of accidents are of different nature and severity. 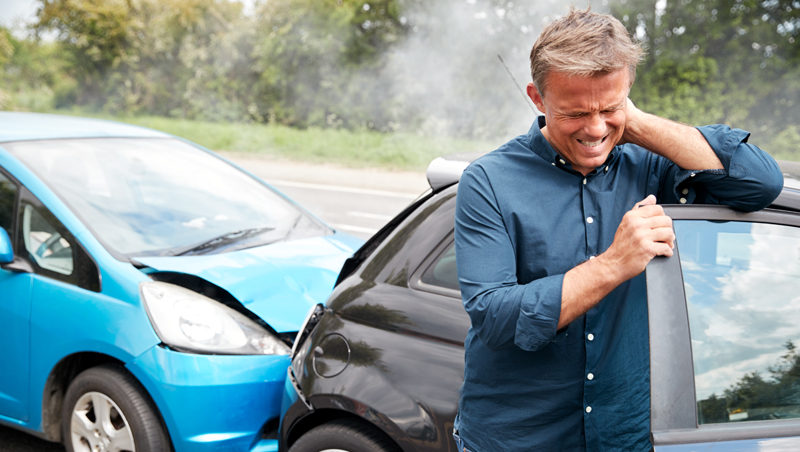 The main affectation of a whiplash is the misalignment of the cervical vertebrae, a decrease or complete loss of the normal C-shaped cervical physiological curve. This curve backward, in side view, in profile, of the spine, is necessary for the proper biomechanical functioning of the cervical spine.

This post-traumatic cervical curve decrease may be a simple hypolordosis, (loss of curve) or a cervical rectification, so instead of having the curve backward, the cervical spine is straight, or it can arrive, in the worst case, to an inversion of the cervical curve forward in the form of a C reversed.

Associated with these changes in the alignment of the cervical physiological curve, muscles, ligaments, intervertebral discs and, in extreme cases, the vertebrae and spinal cord can be injured. In almost all cases of whiplash there is hyperextension and hyperflexion. Sometimes, this can be the result of a lateral tilt movement, also called lateral hyperflexion, right or left, which further complicates the effects of the injury.

Whiplash does not only occur in car accidents. It can also be the result of trauma on the soccer field or from other sports, falls and trauma to the skull, and also during childbirth due to bad maneuvers during delivery.

Sometimes, some symptoms appear immediately after the accident: muscle tension, neck pain, headache, tension and tingling between the shoulder blades, in the arm and the hand. Also, some people may experience ringing in the ears, dizziness, nausea, disturbed vision, etc.

For whiplash problems, your Doctor of Chiropractic will perform a complete exam of your whole spine and pelvic positioning. Any part of your vertebral column could also have been affected during a crash or impact. Your doctor of chiropractic focuses on the cervical area, although sometimes a problem can be found at the base of the spine. He will look for possible displacements, subluxations and a decrease in the cervical physiological curve in order to correct and restore the correct vertebral alignment and position.

Treatment for whiplash through chiropractic pays particular attention to the correct vertebral alignment and mobility of the entire spine. By intervening in these types of injuries, you can avoid many future complications and symptoms that may arise later on.

In the first 10 to 15 minutes after your visit it is contraindicated to sit down.

During this period of time it is necessary to walk to mobilize the joints that we just release and walking also facilitate better joint lubrication and nutrition of the intervertebral discs.

IN THE NEXT 24 HOURS

During the next 24 hours following the first sessions avoid any excessive effort.

Otherwise, the effectiveness of the adjustment received will decrease.

Before and after every visit, avoid all kinds of tension.

Both physical and mental. The more relaxed you are the more benefit you will get from your treatment.

The set appointments must be respected.

They have been established to obtain the best results.

The sensations that each person may experience after an adjustment may vary without affecting the result and benefit of the treatment in the medium and long term.

After an adjustment, you may experience a feeling of relaxation, having a lot of energy, general well-being, disappearance or relief of symptoms, soreness or pain.

You may sometimes even experience discomfort since the body has to adapt to the new posture and position.